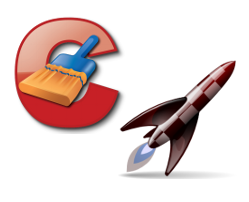 CCleaner has been one of my favorite tools to maintain PCs. It is simple to use and offers powerful tools. It has a small footprint and it can be installed on a USB drive to clean up PCs on the go. CCleaner can clean up files that are left behind from uninstalled apps, fix the registry, and uninstall apps but it is by no means the last word in PC maintenance. There’s no defragmentation or optimization option within CCleaner. Enter Mz 7 Optimizer, an app specifically designed to tune up your Windows 7 PC. Can it replace CCleaner as our PC maintenance app of choice? Let’s find out. 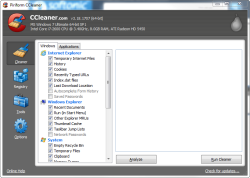 CCleaner features a clean, simple interface. The main window shows a list of things that CCleaner will look for and clean. The user can analyze and remove these files quickly, usually under 10 seconds. It also features a quick scanning registry scanner and back up. Beyond those two major features, CCleaner also has a tools tab for uninstalling apps, deleteing/disabling startup processes, a system restore feature, and a drive wiper.

Mz 7 Optimizer on the other hand is intimidating at first glance. You are greeted with a billion options and it can be intimidating to use if you do not know what each tweak does. While Mz 7 Optimizer’s main purpose is to maintain a PC, it also features interface tweaks that are hidden by windows. This is great for power users but confusing for the casual user.

CCleaner wins on the ease of use as its menus and items are clearly laid out and its developer Piriform keeps the application simple. Power users may appreciate the flexibility and features of Mz 7 Optimizer but it definitely isn’t for newbies. 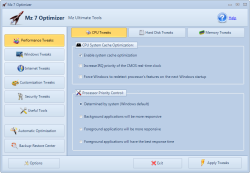 While CCleaner is good at what it does, it cannot match the sheer number of features that Mz 7 Optimizer packs into its program. Mz 7 Optimizer allows you to tweak your CPU, HDD, Memory, change network settings, clean your registry, defragment your drive, schedule backups, and change security settings. The amount of things Mz 7 Optimizer can do will make your head spin.

Luckily, Mz 7 Cleaner has an automated optimization mode which simplifies maintenance on your machine. There are a handful of options you can check and Mz 7 Optimizer will perform those tasks in bulk. 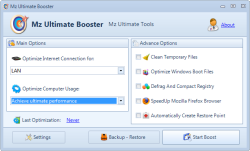 CCleaner has always been one of my favorite maintenance tools because of its stellar performance. Scans and cleaning take just a few seconds. The application launches quickly but does require authentication to run as an administrative process.

Mz 7 Optimizer is not the quickest of apps but it also isn’t the slowest. Performance on the whole was average for most tasks but I found its defragmentation to take a while longer than defrag apps like Auslogics Disk Defrag and Smart Defrag.

I also want to note that Mz 7 Optimizer’s tweaks often require a reboot. It is recommended that you run this program without any other programs open, which will prevent conflicts.

So is there a clear winner? No. These are both great applications but serve different purposes. CCleaner is a fast, portable file and registry optimizer. Mz 7 Optimizer aims to perform ALL maintenance tasks on your machine.

If your Windows 7 PC is running smoothly for the most part, you can maintain it with CCleaner. On the other hand, if your PC is long overdue for maintenance, Mz 7 Optimizer is a better choice for breathing new life into your PC.

If you liked this article then you'll love our newsletter!

Join us to receive hilarious memes, photo galleries, tips&tricks, and the best games!